Poetry around and about the feline.

2012, Halloween, photography, The Owl and The Pussycat

~ ~ ~ Went to sea on a beautiful pea green boat. They took some honey and plenty of money wrapped up in a 5 pound note. for a little history.
Sporting one of my favorite children’s stories this Halloween at work and for the 76 Trick-or-Treaters that came by this evening. My side kick bear from my childhood is the owl.
Happy Halloween to you from the Owl and the Pussycat!

Tick-tock, tick-tock…
If you have ever had an old clock in your home, you know how it becomes part of you. Our very old faithful clock had a hard summer and would stop without warning on several occasions. Speculation? The weather, adjustments, or it just had a mind of its own.
Just as we are about to call the elderly gentleman who works his time magic, our clock seemed to sense this, and is now back keeping rhythmic time and dutifully chiming.
Grace and Twilight have a wonderful habit of “metronome” tail keeping when near the clock.
Such a comfort, our house keeping the rhythm of life
My Grandfather’s Clock song / poem is a good classic read.
Speaking of time, it’s past my bedtime,
So that’s the end of this tail.
Goodnight

It’s a Modern Cat Life friendship. A story of two young females from opposite ends of cat life, a high energy shelter cat and a gentle retired breeders cat. Learning to accept each other, get along, play, and taking comfort in friendship found.
Grace and Twilight send kisses and hope that your friendships grow into love. 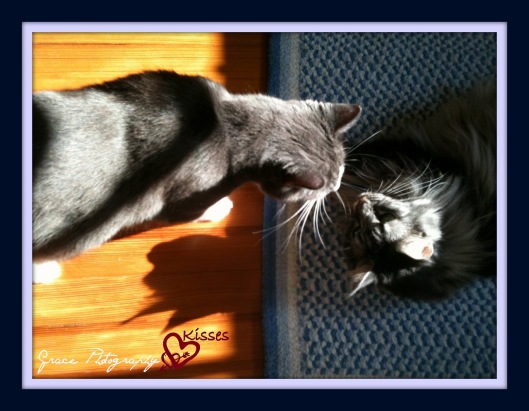 A friendly Sunday to you!

We don’t sleep a wink at night,

So we can nap at day.

We sleep and lounge when it is light,

So night fall is our play.

We hope you have had a restful rejuvenating Sunday!

“Cats invented self-esteem; there is not one insecure bone in their body.”
Erma Bombeck

Contently curled on the cashmere throw as if it were an inherited personal heirloom.

Basking in the sun as a bikini clad model would, with the expectation of accolades from passers-by. Sleeping all hours of the day and never lifting a paw, since there is the required staff. Dining on meals with a preference of an attentive audience. The nocturnal one, who finds it convenient to wake you all hours of the night, for a snuggle.

Irreplaceable, is this cat to one’s heart.

The wind and the cat
Ruffle my fur and send a chill down my undercoat.
Breeze at my whiskers
Fly through the branches as if you were a bird, and blow into my half lit eyes.
Playful friend the wind!

Little Miss, Held forever in our hearts.  Blue January 14, 1996 – April 18 2009.  April 18, 2012… the third anniversary of the passing of my most beloved Kitty Girl Blue.  I lost 10 lbs. in two weeks watching her go.  I had not known she was sick and suffering from Hyperthyroidism, it went undetected, until 18 days before she passed.  I also didn’t know that she would not react well to the medicine provided by my veterinarian’s office.  Loosing my lively spirited Blue, is one of my life’s most painful losses.  “She” is dedicated in her loving memory.

My husband and I adopted her as a 6 week old kitten from a farmhouse down the road.  She was half feral and half Birman.  She was a sick kitten that became a sick cat, however, we knew that we could give her the best care and chance, we had 13 years with her.  Our vet always referred to her as “the front page” cat, this referral came since she was on his front page of the most wild cats he had ever seen.  He wore large thick leather grilling gloves when he cared for her, lol.  Yes, she was an indoor cat, and eventually became adjusted to my husband and me over the years.  The first time I saw her sleep and lay on my lap was at 5 years old, she stayed for 2 hours.  I didn’t move, I just relished the event and knew that years of patience had finally won her love.  Blue was my little girl I never had, my heart was stolen and was never to be the same.

We lived on a 20K acre lake and saw our share of water-moccasins.  One day she killed one at the front of the house in the shrubs as we were taking our morning walk.  She earned “Princess Blue” status from that point on.  After she killed the snake, I killed it unnecessarily further with a garden hoe.  It was quite the experience.

She was not on a lead outside since she was such a good follower.  This led to the day my husband and I spent hours with two extended ladders up a tree trying to rescue her after neighborhood dogs frightened her up into a very tall pecan tree.

I also convinced my husband there would be no bugs including mosquitoes in our bedroom if she would sleep at the end of our bed.  This of course wasn’t true, but she spent the next 8 years sleeping in the high arch of my foot each night.  It was true comfort for me.  I should mention, she loved yogurt.

She has her own song, which I will share one day with you.  I wrote it in rush hour traffic in Dallas on the way home, really.  It’s a children’s song that I plan to use in a book one day.

She has a beautifully shaped kitty urn and sits in my library, the best book there with well-worn chapters.

There are hundreds of stories to tell, but I really want to leave you with a few pictures that tell her story.  Cherished memories of a beautiful love story.

Watching from window to window, curiously wondering if this is a new friend or just a passing fancy.

We try to chat with them, but without success.  So, We enjoy the moment under the blue, cloudy or rain filled skies, wondering where their fancy wings take them, Pretty Birds.

Twilight, so gentle is the love from my feline friend. My heart leaps with joy from her sweet affectionate ways.

Gentle eyes that see so much,
paws that have the quiet touch,
Purrs to signal “all is well”
and show more love than words could tell.
Graceful movements touched with pride,
a calming presence by our side –
A friendship that takes time to grow –
Small wonder why we love them so.

Every once in a while we have the pleasure of making someone smile. My hope is that it was YOU today. Thank you for your visit and tell me what you think by leaving a comment.

Come Walk with Me…